Khloe Kardashian tweeted a photo from inside Vera Wang’s wedding boutique. Could this be the Kim Kardashian wedding dress?

Uh oh, Khloe Kardashian might be in a little bit of trouble. Mrs. Lamar Odom was tweeting from the final bridesmaid dress fitting for Kim Kardashian’s wedding when she took the time to send out a few tweets. 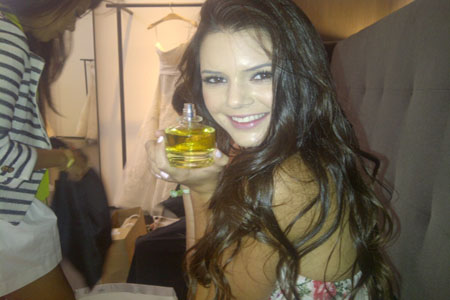 “Just had another fab fitting at Vera Wang’s!!!! I can’t believe the wedding is almost here! So exciting,” she tweeted.

Then, a few minutes later she tweeted a photo of her younger sister.

“Aww look at my stunning sister @KendallJenner She stole my Unbreakable! She’s too cute to get mad at,” Khloe tweeted.

Not a big deal, except check out that dress in the background. Is that the Kim Kardashian wedding dress designed by Vera Wang? It sure looks like it might be, though Khloe tried to play it off.

“Racks of clothes baby it is a dress store :),” she replied to a fan who asked if it was Kim’s wedding dress.

Mmmhmmm. That sounds peculiarly like someone trying to save face after a monumental screw-up. After all, Kim and hubby-to-be Kris Humphries have sold the rights to their wedding photos to People for a reported $3 million.

As for Kim, she hasn’t been tweeting whimsically at the Vera Wang store. After all, her wedding is serious business – she’s working, people! Oh, but she did find the time to shill for Sketcher’s Shape-Ups.

“I’ve been Shaping up in my SKECHERS Livs so I look the best in my dress!” she wrote. Kim knows the ABC’s – Always Be Chasing (Those Dollars.)