Taylor Swift handled a wardrobe malfunction like a pro when her skirt blew up while performing live in St. Louis. 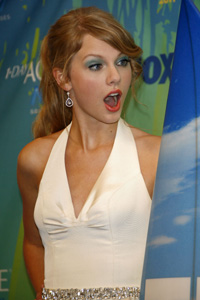 Taylor Swift had a Marilyn Monroe moment when her blue dress blew up while performing live in St. Louis during her Speak Now tour – and one fan caught it all on video!

Swift walked on stage wearing a knee-length, floaty gown and started singing, You Belong with Me, when a gush of wind blew her dress up, revealing her underwear!

“Someone pointed [the wind machine] in the wrong direction,” a close pal reveals. “But she just laughed through it. What’s she supposed to do?”

She must have suspected this might happen, as she was wearing tan, full coverage underwear or Spanx. Some people are calling them granny panties, but watch the video below and you can decide. Good thing she wasn’t wearing a thong!

She quickly brushed her skirt down, without missing a note in the song. The back of her skirt stayed folded up for a bit before she brushed it down.

I guess we shouldn’t be surprised Swift handled her wardrobe malfunction like a pro, as her hugely successful Speak Now tour has outsold Paul McCartney’s tour making her the top selling summer tour. Many of her tour dates, including her last two in New York, are sold out.