Forget about the royal wedding! It looks as if Kim Kardashian and Kris Humphries’ nuptials will be the social event of the year, eclipsing anything the Brits can do, and with more star power! In less than one week, Kim will leave her single life behind and embrace life as a married woman. But rumors abound, just how much money will she make by capitalizing on her big day? 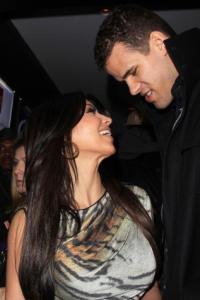 Celebrities know how to do everything on a grand scale. When a celeb like Kim Kardashian decides to tie the knot, no expense is spared when it comes to granting her every wish.

But in the case of KK, whose every move is public fodder, where does the line cross between celebrating a private moment filled with both worry and anxious laughter, and exploiting it for every dollar it’s worth?

The royal wedding of Prince William and Kate Middleton this past April was estimated to cost from $70-$100 million. While the Kardashian wedding won’t be nearly as costly, there is much speculation on the web just how much of the bill will be footed by the family and how much will be paid forby various media outlets.

Shocker! Kim and Kris’ wedding will be televised>>

While Kim is no Starr Jones, the bride and the Kardashian name will likely take in some revenue on the heels of this happy occasion, starting with broadcast rights as well as photo rights. The event will be filmed in its entirety for an E! Entertainment Television Special, and their courtship and engagement was highlighted on the series as well.

To go along with her impending nuptials, Kim created 1,000 bottles of a first-run limited-edition fragrance called “Love”, which sold well in short order.

The Kardashian family knows how to capitalize on a good thing. Their reality show, Keeping Up With The Kardashians has been a gold mine for E! Entertainment and executive producer Ryan Seacrest. In a few short years, they have taken a family that was only known for having a high-powered attorney for a father, (the late Robert) and turned themselves into a $65 million dollar empire, with mama Kris at the helm.

Mark Pasetsky at Forbes Magazine is speculating about how much Kim’s wedding photos will sell for. He estimates about $2 million in domestic rights for the photos. Of course, there will also be international rights bringing in a profit as well, about $1 million according to Pasetsky.

There is also profit to be made from selected wedding vendors that will showcase their products on Kim’s big day. Plus, whatever exclusive interviews Kim and Kris grant to selected media outlets on the day of and after their nuptials, will also boost Kim’s bottom line (no pun intended).

All in all, it’s a good time to be a Kardashian. Plus, there’s also the rumors that Khloe’s pregnant. Wonder how much they can sell that story for!