Entourage may be exiting stage left but Mark Wahlberg is still in business with HBO. What’s a guy to do after capturing millions of viewers with the antics of Vincent Chase and gang? Do it all again of course. Only this time, Vincent Chase will be a girl. No we’re not talking about drag; a female entourage may be entering stage right just in time for us to wipe our tears after saying goodbye to the boys. We have Emily Montague to thank for that. 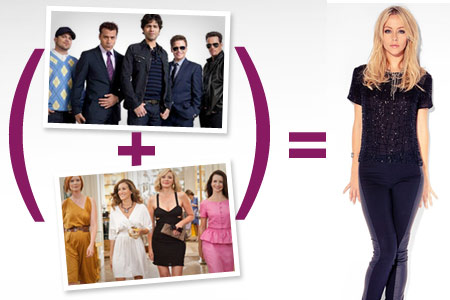 Though the show will feature three girls living in Los Angeles, much like we would envision a girly version of Entourage, and will be produced by Mark Wahlberg, Emily doesn’t want us to be so quick to dub it as the new Entourage.

“I’d say the only real similarity is that it’s [set] in Los Angeles,” she tells us.

Flattered by comparisons to both Sex and the City and Entourage, she says it will be a bit of a darker comedy than Entourage has been and these girls won’t have quite as much success as our favorite Manhattan ladies strutting the streets in their Manolo Blahniks.

“It’s very gritty, pushing the limits, girls behind closed doors. It’s about friendship and I think that Los Angeles brings out very intersting things in women so we’re going to speculate on that.”

Emily, co-writer and producer of the mystery series, says she ideally will star in it and will most likely to play the party girl.

Along with having the brains of Wahlberg on board, she has a writing partner, Leah Rachel, whom she crowns a very good friend of hers.

“We were actually waiting tables together, both acting and going down that path. We decided that we needed to do something to set ourselves apart.” Hence, the birth of this female entourage concept. “We were really wanting a fun girl’s show and there was a huge void with Sex and the City being off the air.”

The currently untitled HBO series hopes to set itself apart and air in 2012. For now, check out Emily in Fright Night with Collin Farrell >