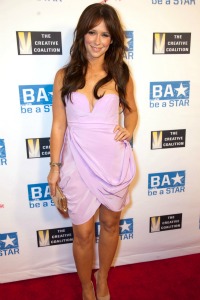 This is how rumors get started, kids. Jennifer Love Hewitt says that her reported crush on former Bachelorette contestant Ben Flajnik was totally blown out of proportion and the the pair are not dating.

Serial monogamist Hewitt says she was just having a little fun on Twitter when the gossip world went haywire with chatter that she and Flajnik were dating.

“I sent out funny tweets about Ben F. then it got all sort of blown out of proportion. Now it’s like the rumor mill is crazy. I have nothing to say except I’m totally single,” she told Ryan Seacrest on his Wednesday morning radio show.

But what about the sightings of Hewitt and Flajnik apparently on a date in San Francisco?

“We did meet, but totally by coincidence,” she said.

She blames the whole thing on Twitter. “I don’t know why people are making such a big deal!” Hewitt said. “I was looking for something pop culture to tweet about. I’m new to the Twitter situation and I wanted to have fun with the twitters out there.”

“Everybody has taken this and it is all blown out of proportion.”

Considering the fact that Jennifer Love Hewitt regularly parades her boyfriends on the red carpet for their second date like an old married couple, her statements to Seacrest are believable. She and Flajnik haven’t been spotted since, nor has she slapped a Cartier Love bracelet on him or picked out more engagement rings from Tiffany.