Anne Hathaway broke out her mad rhyming skills on Conan last night to vent her frustration at paparazzi who are invading the set of Dark Knight Rises. 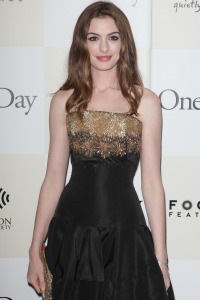 We all know that Anne Hathaway is an immensely talented actress, but last night the world discovered her hidden talent–rap star.

In a delightful appearance on Conan to promote her new flick One Day, Hathaway revealed an amazing talent that no one would have ever suspected of the perfectly poised actress.

Channeling her inner Young Jeezy, Hathaway told Conan O’Brien that her frustration with paparazzi leaking secret photos from the set of Dark Knight Rises — in which she plays Catwoman — brought out her mad skillz.

“With all the stuff that’s been going on with Batman, the paparazzi attention’s been a little intense,” Hathaway said. “So I actually wrote a rap song about it.”

Her rapid-fire rap was delivered in perfect thug life fashion with impeccable swagger and flow. Has Hathaway stumbled upon a nice little side career in music a la Gwyneth Paltrow? Decide for yourself.

read on for more anne hathaway