Harry Potter’s Daniel Radcliffe is all grown up and moving from wizards to ghosts in his upcoming film, The Woman in Black. The young actor tackles full-on horror in this period piece that centers on a man forced into solving a supernatural mystery. 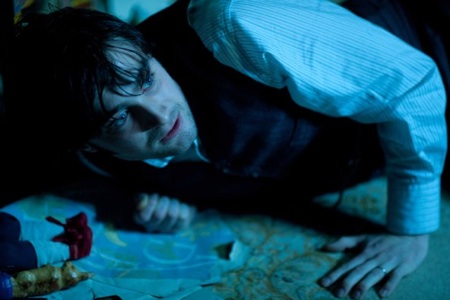 CBS Films has released the first official trailer for The Woman in Black, which features a scruffy Daniel Radcliffe in a haunted house. The story centers on a young lawyer named Arthur Kipps (Radcliffe), who’s sent to a remote village to straighten out the affairs of a recently deceased client.

Going off that info, the plot sounds pretty normal but that’s not all folks. While at the deceased’s home, Kipps starts to hear sounds and see visions of a woman dressed in all black. He has no idea what she wants or what he should do. None of the townspeople will give him an explanation, so he embarks on a terrifying quest for answers — alone.

After finishing a 10 year run in a blockbuster franchise, The Woman in Black seems like a great post-Potter gig for Radcliffe. We’re sure saying goodbye to the series couldn’t have been easy but we’re excited to see the next chapter in his career.

The Woman in Black is directed by James Watkins and co-stars Ciaran Hinds, Liz White, Janet McTeer and Alisa Khazanova. The film is scheduled to hit theaters on Feb. 3.

The Woman in Black trailer