Abercrombie & Fitch embraced The Jersey Shore hype with its ‘The Fitchuation’ t-shirts, but that was last year. Now, the clothing line is offering Michael ‘The Situation’ Sorrentino and his Jersey pals “substantial payment” to stop wearing their gear. Seems the GTL lifestyle counteracts their brand’s “aspirational” vibe.

Abercrombie & Fitch Proposes a Win-Win Situation reads the memo that’s making the rounds this morning. The clothing company is begging Mike “The Situation” Sorrentino and The Jersey Shore crew to cease wearing their clothes, and even offering to pay them for doing so. 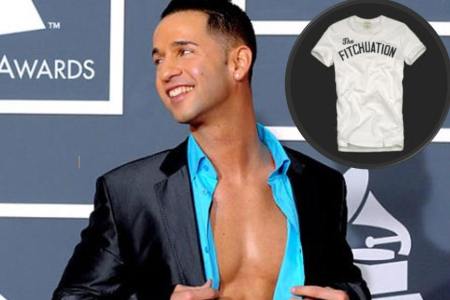 “We are deeply concerned that Mr. Sorrentino’s association with our brand could cause significant damage to our image,” reads the release. “We understand that the show is for entertainment purposes, but believe this association is contrary to the aspirational nature of our brand, and may be distressing to many of our fans. We have also extended this offer to other members of the cast, and are urgently waiting a response.”

Frankly, it’s hard to imagine this is anything but a publicity stunt. The “aspirational” brand not only uses half-naked hotties as advertising, both at stores as greeters and in magazines, but also cashed in on the Situation’s fashion by promoting a Fitchuation t-shirt last year.

“Abercrombie & Fitch, their most popular shirt, they told me, is ‘Fitchuation,'” Sorrentino told New York magazine last year. “I mean, where did they get that from? Obviously from myself.”

The Situation hasn’t responded via his twitter account yet, but it seems MTV is loving the attention.

“It’s a clever PR stunt and we’d love to work with them on other ways they can leverage Jersey Shore to reach the largest youth audience on television,” an MTV spokesperson told The Wall Street Journal.

Stay tuned for updates on this Abercrombie & Fitch Situation.