Actor Gerard Depardieu put on quite the show when he decided he would relieve himself in the cabin of an airplane after crew members told him he could not use the restroom until after takeoff. 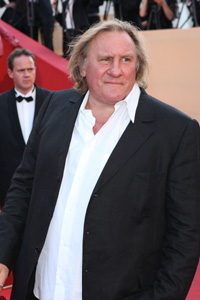 Green Card actor Gerard Depardieu decided he just couldn’t hold it. While aboard a delayed CityJet flight from Paris to Dublin, the 62-year-old French actor was told by the crew that he would have to wait to use the bathroom until takeoff.

A passenger on the plame said that the actor was drunk, and kept saying, “I want to piss. I want to piss.” He then stood up and relieved himself on the cabin floor in front of all the passengers!

The airplane then had to return to the gate and was delayed for two more hours for cleaning.

CityJet joked about the accident, tweeting: “As you may have seen on the news, we are busy mopping the floor of one of our planes this morning. We’d also like to remind all passengers that our planes are fully equipped with toilet facilities.”

A spokeperson for Air France-KLM also told the AFP that, “I will only confirm that he, in effect, urinated in the plane.”

No word if Depardeiu, who has been arrested for a DUI in the past, will be charged with anything from the airline.