More details are coming out about the death of Real Housewives of Beverly Hills star Taylor Armstrong’s husband, Russell. Find out the latest, including how Taylor found her husband and more details on what could have driven him to suicide. 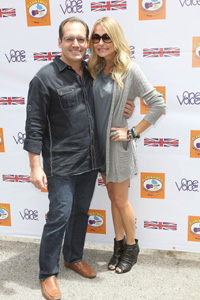 Real Housewives of Beverly Hills star Taylor Armstrong found the body of her husband Russell after he hung himself, one source reports. Armstrong, who had filed for divorce on July 15 from Russell, became concerned when she had not heard from him for several days.

Armstrong, 40, and her assistant went to the house on Mulholland Drive to check on him when they found him dead. The LAPD says that 47-year-old Russell hung himself at a friend’s home and was pronounced dead at 8:16 pm on Monday.

Even though Russell was reportedly devastated over the divorce, he also had financial issues and was having difficulty dealing with the pressures of the Bravo reality show. RadarOnline is also reporting that Russell was concerned that Taylor was writing a tell-all book that would reveal that he was bisexual.

“Not only was it going to come out that Russell was bisexual, but there were people on the record that were going to talk about the kind of sex he liked,” the source reveals. “He was into S&M type stuff; choking, rough-housing and slapping.”

The source says that Taylor found gay websites that her husband had been searching on his computer and she suspected that he was meeting men at the gym that he’d met on the website.

“Taylor Armstrong is devastated at the tragic events that have unfolded,” her rep says.

The Real Housewives of Beverly Hills new season is set to air on September 5th. No word from Bravo on how they will address this horrible tragedy, however they have released a statement saying they are deeply saddened.