Emily Montague’s name might not ring a bell with you yet, but her upcoming projects are likely on your radar. Her first blockbuster, Fright Night with Colin Farrell, hits theaters tonight. She’s also working alongside Mark Wahlberg to produce HBO’s next scandalous, can’t-get-enough-of-it series. Get ready to sink your teeth into this breakout star and what she has to say about our vampire crush. 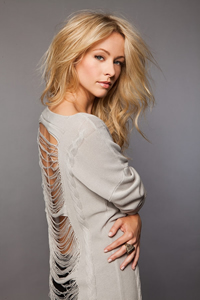 When we asked Emily what it was like to work with Colin Farrell she says, “He is a dream.” Edward Cullen, please momentarily step aside for Colin Farrell. Alongside the comments that Colin is amazing, professional and the typical etcetera, she throws in that “he’s a little bit of a ball buster for sure.”

After seeing Colin’s recent role in Horrible Bosses as a loony drug addict with some strange hobbies, we can totally picture this ball buster joking around on set and we’re ready to see him play the bad boy in a whole new way. Emily sure didn’t know what she was in for.

“I lost my voice,” she says about having to perfect her scream in fear of Colin’s blood sucking teeth.

However, she tells us that working on a horror set has made it easier for her to stomach the idea of seeing them in the future.

“I had a hard time seeing scary movies before working on one. It was fun to see the behind the scenes, the special effects, the makeup and what creates a scary mood. It’s all [going to be] okay,” she jokes.

Not to mention, Colin Farrell is pretty easy on the eyes. That is, when he’s not trying to kill you as Jerry, the vampire next door… unless you’re into that, of course. It’s okay, Emily admits she may have had a little crush on him too.

“Who didn’t have a crush on [Colin Farrell]?” she says.

What roles can you expect to see this up-and-coming star in next?

“I’m really focused on the show that I’m developing at HBO and hopefully that will be my next project.” Though she isn’t allowed to reveal a whole lot at this point, we were able to squeeze a few juicy details out of Miss Emily M.

Get all the details here >>

Ideally, the show will air in 2012 and will focus on the lives of three girls trying to make their mark on Los Angeles. Though she is flattered by the comparisons to Entourage, she claims that it will stand on its own.

Unlike Vinny Chase and gang, these girls don’t have it all at the start of the series. She deems it a darker comedy that will fill the gap of a much needed girl’s show since the exit of Sex and the City.

“It’s [still] very sexy so I don’t think guys will mind sitting down and watching it with their ladies,” she adds.

You can see Fright Night in theaters tonight and check back for our feature on Emily in which she takes us shopping to reveal more details about the female entourage in her anticipated HBO show.