The parents of Casey Anthony are breaking their post-trial silence. Who is getting their first interview? 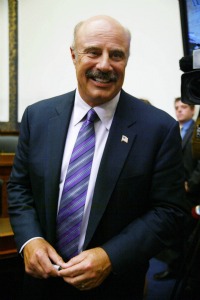 George and Cindy Anthony are breaking their silence for the first time since their daughter Casey Anthony was acquitted of murder charges in the death of little Caylee Anthony — and they are giving the interview to none other than Dr. Phil.

“Cindy and George have suffered a horrific loss with the untimely death of their granddaughter Caylee, and they have since endured an unprecedented public attack on their family,” Dr. Phil McGraw said in a statement. “Have these attacks been warranted, or not? I looked them straight in the eye and asked them some very tough questions.”

“Despite living under a ‘media microscope’ for years, their story has never really been told and there’s so much more to it than we’ve heard in the media.”

“Nothing is off limits during this interview,” he says.

Lest you think the Anthonys are profiting in any way from the interview — Casey Anthony was asking for over $1 million herself — Dr. Phil assures us that he won’t be paying the couple any money, but will be making a donation to the charity set up in their granddaughter’s name.

“The couple will derive no income from Caylee’s Fund,” Dr. Phil said, adding that the charity will “focus on promoting processes to educate the public about — and advocate for — grandparents’ rights as well as missing and abused children.”

George Anthony says they turned to Dr. Phil to help them during these troubling days. “We appreciate the way in which Dr. Phil has helped others, and we trust him enough to completely open our hearts in telling our story,” he said. “He is a professional that understands the uniqueness of our family situation. There’s no one better to do this interview than Dr. Phil. We knew he would ask the difficult questions, and we were right.”

Casey Anthony has been estranged from her parents since she was in jail awaiting trial.

The interview with the parents of Casey Anthony will air on The Dr. Phil Show September 12.