Taylor Momsen reveals she’s not just done with the Jenny Humphrey drama on Gossip Girl: She’s done with acting, altogether. The Pretty Reckless frontwoman is dedicating herself to rock. 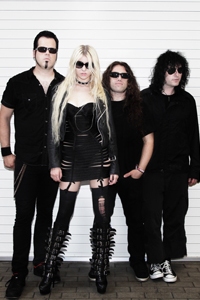 “I quit acting,” Taylor Momsen told Elle after a recent concert in Japan. “I quit Gossip Girl and now tour and am in a band, and that’s pretty much all I want to do. Hopefully I’ll be able to only do that for the rest of my life.”

Momsen broke onto the scene as Gossip Girl social climber Little J, but it didn’t take long for her to start overshadowing her rebellious character’s machinations with her own. The teen rocker made news for her revealing getups, raunchy interviews and smoking and exposing herself on stage, not to mention the constant stream of speculation and updates on whether or not she’d return to the GG fold.

After missing the beginning of Gossip Girl‘s last season, Momsen brought Jenny back to town, but that didn’t last long. Guest star Tim Gunn slammed her onset behavior and her diva antics landed her on an “indefinite hiatus” in November. By summer, the news came that she and Jessica Szohr were out.

Amid all this, Madonna replaced Momsen as the face of her clothing line, Material Girl, going with Kelly Osbourne instead — and you know you’re trouble when Madonna can’t put up with you!

The Momsen quote making rounds today makes it sound as though she’d never consider another acting gig, but SheKnows has to remind readers that Momsen is just 18. The young diva is clearly more interested in acting out than acting right now, but if the whole rocker thing doesn’t pan out or she just grows out of it, she could conceivably return to her day job.

“Maybe at some point,” Momsen told The Huffington Post back in June. “It’s something I enjoyed and it’s a big part of my life since three years old, but I’m happy doing what I’m doing. I won’t say I’ll never act again, but music is what I think about.”

With her band Pretty Reckless taking the world by storm, Momsen is enjoying the ride. “The reception has been great. We went from playing a 100-seat club to a 3,000 [seat] venue, and once the record came out, we’ve started seeing fans singing every word,” she marveled. “I’m excited to tour this summer in Japan, Europe… Ireland, Russia, Australia… it’s a world tour really.”

In short, Momsen is totally over acting, for now. Hopefully, she won’t burn too many bridges before she tries to make a return.

Taylor Momsen exposes herself in the UK