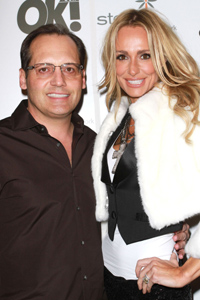 Bravo and Andy Cohen have both expressed their sadness over the apparent suicide of Russell Armstrong, the husband of Real Housewives of Beverly Hills star Taylor Armstrong.

Russell, 47, was found hanging in a bedroom Monday evening at a house on Mulholland Drive in Los Angeles. Police are treating the death as a suicide.

Russell and Taylor filed for divorce in July after six years of marriage after she said he pushed and shoved her. Russell, who has a daughter named Kennedy with Taylor, said that the Real Housewives show “literally pushed us to the limit,” however Armstrong’s lawyer told TMZ that he had huge debt problems and was “extremely bummed” by his divorce.

“All of us at Bravo are deeply saddened by the tragic news of the death of Russell Armstrong,” the network said in a statement. “Our sympathy and thoughts are with the Armstrong family at this difficult time.”

Bravo exec Andy Cohen tweeted his condolences, writing: “I am so very sad about today’s news. My prayers and thoughts are with Taylor Armstrong and her family.”

Real Housewives of Beverly Hills’ co-star Camille Grammer tweeted her sympathy. “My sympathy and condolences go out to Taylor and Kennedy. My thoughts and prayers are with them.”

Real Housewives of New Jersey star Danielle Staub also sent a message to Taylor, writing: “Love and prayers to you and your family. I pray your privacy will be respected in this great time of need!”