Adaptations are a tricky business, especially when entering fanboy territory. Brad Pitt’s World War Z is still over a year from landing, but a new synopsis reflects a major change from the source, World War Z: An Oral History of the Zombie War, and that has fans in an uproar.

While Brad Pitt and his World War Z crew are busy turning Glasgow, Scotland into a zombie-ravaged Philadelphia, fans of Max Brooks’ 2006 bestseller of the same name are in an uproar. It seems the big screen adaptation has taken one giant liberty that changes everything. 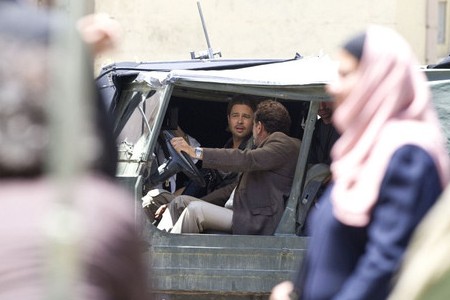 The novel World War Z: An Oral History of the Zombie War won fans over by offering a new take on the zombie genre. First-hand tales skip over the shock, awe and rotting bodies of the standard zombie epidemic, picking up, instead, when the zombies have already lost. It is a cautionary tale, with human survivors of the apocalyptic Dark Years looking back at the era that almost destroyed the human race and recounting humanity’s survival.

Fanboys were skeptical when Brad Pitt’s production company, Plan B, stepped up to bring the tale to the big screen, with Pitt as the star. Optimism started to rear, however, when Brooks gave the script by J. Michael Straczynski (Changeling) the thumbs up.

That didn’t last long, however. In spite of raves from everyone who had seen the script, Matthew Michael Carnahan (The Kingdom) was called in to do a rewrite. Now, an early synopsis for his script has landed and with Straczynski’s name removed from the project, Carnahan seems to have delivered a different story.

“The story revolves around United Nations employee Gerry Lane (Pitt), who traverses the world in a race against time to stop the zombie pandemic that is toppling armies and governments and threatening to decimate humanity itself,” the Paramount release previews.

In other words, the film adaptation throws Brooks’ unique approach aside and plunges right back into typical zombie territory. The action picks up at the brink of the Zombie Wars, making Lane a hero, rather than a historian. Instead of interviewing survivors, Pitt’s character will be trying to save the world.

With a reported $125 million budget and a cast that includes Pitt, Bryan Cranston (Breaking Bad), Matthew Fox (Lost), James Badge Dale (The Departed) and Mireille Enos (The Killing), World War Z could still easily turn out to be a stellar zombie flick, but the message boards are afire with fans who are quite confident it won’t be anything like Brooks’ tale.

World War Z is set to hit theaters December 21, 2012, and when it lands, it will have more than just the book to measure up to. Johnny Depp’s Lone Ranger and Tobey Maguire’s Life of Pi are set to drop the same day, with Quentin Tarantino’s Django Unchained scheduled for that week as well. However, The Hobbit will have a one week lead on audiences with a December 14 release.