It was a day that will live in rock and roll infamy. Elvis Presley, the King of Rock and Roll, was found dead of an apparent heart attack in his iconic Graceland home, on August 16, 1977. It was one of those times where you always remember where you were when you learned of his passing and for some, it is still a day of quiet reflection. Fans flock to Graceland every year to commemorate Elvis’ life and this year is no exception. 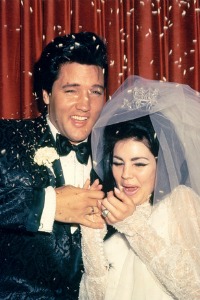 Elvis Presley died at the age of 42. So young to have a life cut short, but it was a life full of so many twists and turns that it seemed to be three lives put into one.

Fans marked the 34th Anniversary of Elvis’ death with a candlelight vigil to celebrate his life and pay their respects to this enduring legend.

The vigil, which lasted overnight and into the wee hours of the morning, is always the focal point of Elvis Week at Graceland, which annually celebrates his life and music the entire anniversary week.

This year, an estimated 20,000 people descended on Graceland, in Memphis, Tennessee, to honor the music legend. Fans come from as far away as Japan, Germany and Brazil to sing, honor and remember the most famous singer in rock and roll history.

Many take the tour of Graceland, all visit his grave, and it is such a touching experience it brings many fans to tears.

Said fan Debbie Moller, “The songs they play make you think back to what you were doing the day he died.”

The reason Elvis is still so beloved? He broke all the rules when it came to music. He sang soul music and was white. He moved his hips and danced around when other singers stood still. He made the audience a part of his concerts instead of keeping them at arms’ length. Elvis was a music video icon even before music videos were popular. He was cool for both guys and girls to admire. Most of all, he introduced us to the best part of ourselves that had long been supressed. The part that wanted to let loose and be set free. This is why fans still commemorate his life and remember his death. Because when he died, a part of his fans went with him.

Other reason to celebrate a life today, its’ Madonna’s birthday!>>