LeAnn Rimes isn’t shilling for Mikoh Swimwear after all, the company confirmed.

LeAnn Rimes might fancy herself a model — and she might be willing to pose in Mikoh Swimwear for free bikinis — but that doesn’t mean she’s in a modeling contract with the swimwear company. 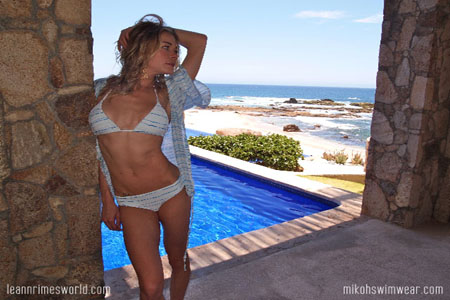 “Some other sites are mentioning this is an ad campaign, but it’s not,” a spokesperson for Mikoh said.”She was not hired as a model or spokesperson for the Mikoh brand, so there is no modeling job to mention.”

The rumors started after Rimes sat down for an interview with the company’s website and basically gave them free advertising.

“[My] favorite suit is the white and blue stripped Sumatra banded triangle and the St. Tropez banded booty short… and the Avalon robe cover up. Love!!” Mrs. Eddie Cibrian said while posing in multiple bikinis.

Apparently some people thought she was in a contract with the company. We can’t imagine why they would think that?! It’s so obvious she’s doing this because she just loves the company and isn’t getting anything free in return.

Honestly, we have to give Rimes kudos for being a shrewd business woman. After all, how much free swag is she getting for mentioning companies in tweets and interviews?

“In my beach bag is always Neutrogena sunscreen, burts bee’s lip balm, an Olympus EPL2 camera, a fedora, iPhone and a bottle of Don Julio 1942 Tequila,” she told Mikoh.

We love these products and all, but how many times do you say “I just love bringing Don Julio 1942 Tequila when I’m having a picnic with friends?”

Do you think LeAnn Rimes should model bikinis as a side gig?