Engaged Twilight fans, rejoice! You can wear a wedding gown just like Bella Swan’s, coming to a bridal shop near you this November!

Call it the most anticipated wedding dress since Kate Middleton walked down the aisle–the Twilight wedding gown may be the second-most talked about frock of the year. 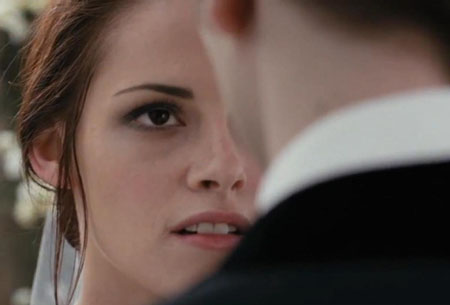 So far Bella Swan’s dress is shrouded in secrecy, but we know two things for sure–it is being designed by Carolina Herrera and — drumroll please — you’ll be able to wear it yourself!

The label plans to market the replica dress under their Twilight Bridal line and have it ready in stores by late November — after Breaking Dawn premieres.

Want to get your hands on it? First you should probably watch the movie when it debuts November 18 to make sure you actually like the dress, which is said to be inspired by Jane Austen-era gowns as a nod to the fact that Edward Cullen is actually 110 years old.

If you still like it, head to an Alfred Angelo boutique or one of the licensed independent bridal shops that carry the line and transform yourself into the perfect vampire bride.

read on for more twilight Saga