How did Madonna celebrate her 53rd birthday? With a big ole’ kiss from her 24-year-old boyfriend, of course. 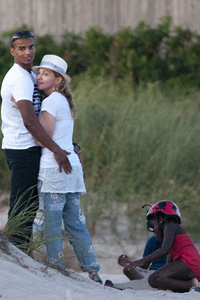 Madonna celebrated her 53rd birthday by spending the weekend in the Hamptons with her French breakdancer boyfriend, Brahim Zaibat, who is 24 years old.

The couple was spotted embracing and kissing on the beach while Madonna’s 5-year-old adopted children, Mercy and David, had fun playing in the sand.

The couple has been dating since last September after Zaibat was a dancer at her Macy’s clothing line launch. Madonna seems to have a soft spot for younger men, as she dated Brazilian model Jesus Luz (who was also 24) in the past.

So what does Zaibat’s mother, who happens to be eight years younger than Madonna, think of his new girlfriend? “She’d (sic) just a woman like all the others.She’s an extraordinary artist and world famous, of course, but a woman above all,” she says.

In addition to spending lots of time with her new boyfriend, Madonna and her 13-year-old daughter Lourdes have launched their clothing line, called Material Girl, which is available at Macy’s stores. The juniors clothing line retails from $12-$40 and features clothing, shoes and even accessories.

The Material Girl shares her birthday today with another important event – the 34th anniversary of the death of Elvis Presley, who died in 1977 at age 42.