For the past year, every actor between the ages of 20 and 30 has been fighting for one role: Jeff Buckley. At one point, Twilight heartthrob Robert Pattinson was the biopic’s frontrunner but he’s been out-shined by a Broadway star. Cue Reeve Carney! 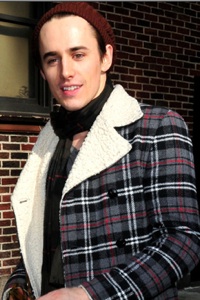 Sorry Robert Pattinson, the new Jeff Buckley has been found and he’s not a vampire. Over the past few months, Hollywood has been obsessed with finding a young actor with the right look and enough talent to play the late singer-songwriter. And it looks like Spider-Man: Turn off the Dark star Reeve Carney got the job.

Carney will play the late Buckley who died in 1997 at the age of 30. The musician accidentally drowned in a river, leaving behind family, friends and millions of fans. Jake Scott (Welcome to the Rileys) will direct the untitled film based on Buckley’s life, which is scheduled to start shooting this November.

Scott’s Buckley flick will get some competition from two other biopics, with the most prominent being Greetings From Tim Buckley. Gossip Girl star Penn Badgley will play the musician in the film that centers on “a pre-fame Jeff Buckley who reconnects with his estranged father Tim by singing at a tribute concert for his folk-singer dad,” according to Deadline.

Carney vs Badgley, who will win your hearts and money?

Which Buckley are you more excited to see?