We’re not going to lie, watching Ames Brown run after Jackie Gordon’s limo on this week’s Bachelor Pad 2 was sweet – – but also kind of funny. Read on for the details.

This week’s Bachelor Pad 2 challenge was all about targets and Jake Pavelka had a big old target on his back. 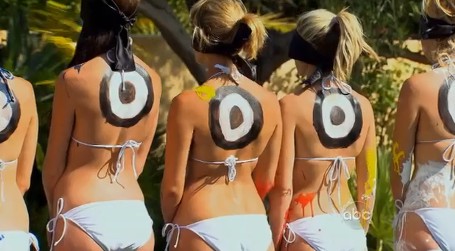 In the Target On My Back challenge, the women were asked a series of silly questions like “who they’re the most attracted to.” When she was sure of the answer she’d launch an egg filled with paint at her “man target.” Points were given for each target hit.

Once the women were done, it was time for the men to launch the eggs at the women. The winners of the challenge were Melissa and Michael. Their prize was each got a 3-on-one date.

Michael took his dates Holly, Melissa and Erica to a haunted asylum/hospital where screaming ensued and Holly and Michael seemed to reconnect over tears and a mutual rediscovered love for each other.

Over on Melissa’s date, Kirk, Kasey and Blake head to a romantic boat party with their lady. Champagne was flowing and Blake gave out kisses that he shouldn’t have, all in the name of saving himself and it worked.

The house was far less interesting since Jake Pavelka was still trying to get on Vienna Girardi’s good side while everyone else tried to hang him out to dry. It was all very blah — until Ames Brown gave us something to talk about.

Ames Brown and Jackie Gordon have been like little kids, stealing make out time when they can, but it all came to a head.

During the rose ceremony, Chris Harrison got an earful from Vienna Girardi about being forced to be in the house with Jake and he point blank said he’d call her a cab, but that was before he told everyone two girls would be going home this week — instead of one guy and a girl.

Gia decided to take herself out rather than let Kasey have the satisfaction of driving her out and then came the cutest thing ever!

Jackie was voted out and as Ames walked her to the limo and watched her go — he had a moment of weakness and chased after the limo. He left with her!

What did you think of this week’s Bachelor Pad 2? Was Ames adorable and nuts?