Mick Jagger has been called one of the most influential frontmen in rock & roll — and the rock icon continues to think outside the box with his new single….which he sings in Sanskrit. 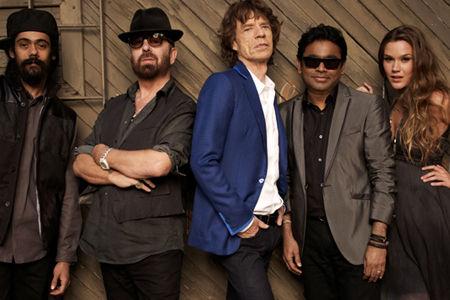 Mick Jagger’s single will be sung in Sanskrit and is titled Satyameva Jayate, or Truth Alone Triumphs. “A long dream for me to raise one of the morals of Indian culture which is Satyameva Jayate and make it as a song,” Rahman told the Press Trust of India. “This is historic… it is iconic in a way. I hope people will like it.”

Jagger agrees, saying he was in the Caribbean at the top of the hill enjoying nature when he was inspired to create a band with an “infusion of music from different parts of the world mixed together… I never thought it would actually happen.”

The group actually wrote 22 songs for the album within one week of working together! The songs were recorded in studios around world, including France, India and Cyprus, however the majority were recorded in Los Angeles.

Jagger said the group came into the studio with “ideas, a few guitar riffs, a few snippets of lyrics. It’s not my usual sort of way of working. You always want to leave some room for improvisation, but you need to have something, some songs, when you walk into the studio. It evolved very quickly. We sat around with our little pads (writing). We did do a lot of jams but it’s all coherent and arranged. We just wrote them quickly.”

In case you were wondering, the group’s name of SuperHeavy was inspired by champion boxer Muhammad Ali.