Adam Carolla is apologizing, sort of, for several shocking comments he made ripping gay and transgendered people. 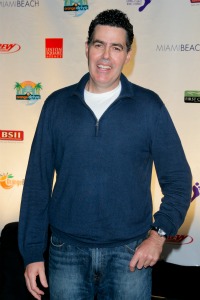 Car Show host Adam Carolla is no fan of anyone living an alternative lifestyle — his comments condemning gays and transgendered people pretty much prove that. Now the outspoken star has offered what sounds an awful lot like a very half-hearted apology, which many consider to be almost as offensive as his original comments.

Last week on his podcast The Adam Carolla Show, the host went on an anti-LGBT tirade, saying, “Sure, I went to school with a bunch of transgender guys, and now I work with them, but what the [expletive]? When did we start giving a [expletive] about these people?”

“Every time I see Chaz Bono, my [expletive] looks at me and says, ‘What?'” Carolla said.

Now, the loudmouth who used to co-host Loveline with Dr. Drew Pinsky is offering a half-hearted apology — not for his comments, but for the fact that people are upset over them. He told TMZ, “I’m sorry my comments were hurtful. I’m a comedian, not a politician.”

Carolla has a long history of racist and homophobic verbal diarrhea, a fact that has not escaped GLAAD.

“Given his history of antigay and racist comments, networks and advertisers should know what their money is supporting if they choose to hire Adam Carolla,” Herndon Graddick, senior director of programs at GLAAD, said in a statement. “The gross intolerance that he tries to pass off as comedy should not have a place on our airwaves.”

Despite posing for the California No H8 campaign, Carolla has said that “a mom and a dad is better than two dads or two moms” and that instead of LGBT they should refer to themselves as YUCK.