Most of us wouldn’t celebrate turning 45 by throwing on a bikini and frolicking on the shore, but then, most of us don’t look like Halle Berry. The Oscar-winning beauty hit Malibu beach with her three-year-old daughter Nahla this weekend and proved she’s defying age — and gravity!

Halle Berry celebrated her 45th birthday on August 14, 2011 with a Malibu bikini romp that has everyone gawking. 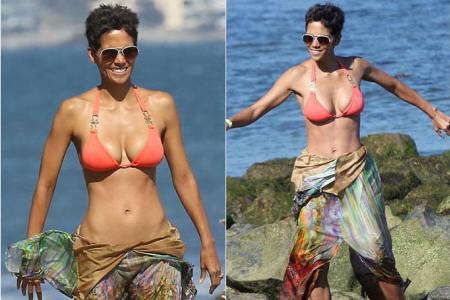 “I see it happening and there’s nothing I can do about it,” Berry once said of aging. “I want to fight it, I want to punch it out, get mad at it and argue with it, but gravity says, ‘I’m coming and I’m coming to get you!'”

However, Berry seems to be winning that race against gravity so far. Photos circulating from her day in the sun prove that to her, age is just a number — and that goes beyond the superficial. There’s no doubt that Berry has one rocking body for a woman of any age. In fact, the new bikini shots making the rounds look remarkably similar to her famous Die Another Day bikini shot almost a decade ago, in 2002.

The new pics not only reflect a total knockout, but they also catch Berry being young at heart — playing in the sand, maneuvering the rocks with her daughter and even wrestling with a gal pal. 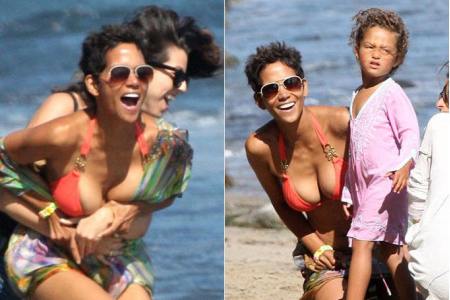 Needless to say, the shots of two ladies wrestling are making the rounds for other reasons, but SheKnows loves them because they show Berry isn’t too grown up — or divalicious! — to get down and dirty. She seems to have put up a good fight on the shore, but ultimately crashed in defeat into the water. Even as Berry’s friend threw her down, however, Berry was grinning ear to ear.

While some outlets are reporting Berry’s beau Olivier Martinez was part of the beach outing, E! reports he couldn’t make the celebration. He was, however, around for the brunch celebration at Mirabelle in Los Angeles the day before.