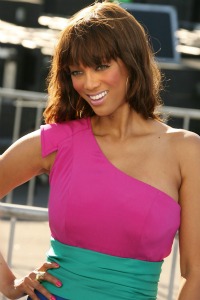 So much for Kim Kardashian’s luxe bridal registry. Despite picking out scads of ridiculously expensive napkins, the bride-to-be shouldn’t expect to receive very many gifts — at least, if the plans of guest Tyra Banks are any indication.

Tyra was super-chatty about Kardashian’s upcoming nuptials while on the Do Something Awards red carpet Sunday, and one of the choice bits of info she shared with People is that she isn’t planning to give a wedding gift!

When Tyra was asked what she planned to give her friend in honor of her new marriage, she replied, “Nothing! A kiss and a congratulations.”

Cheap-o! Even if she feels as if Kim truly doesn’t need a wedding gift from her, it is rude not to give one (if you can afford it, of course). At the very least Tyra could make a charitable contribution to one of Kim’s favorite charities.

One thing Tyra was generous with was info on Kim’s Vera Wang wedding dress. She said, “I gave [Kim] the advice of going with a silhouette that the world isn’t used to seeing her in, so we’ll see.”

“What she showed me was so beautiful,” Tyra revealed. “It’s interesting because they were pictures from a fitting, but it actually looked like the wedding, like her hair was done. So it was like a real almost dress rehearsal and she looked absolutely beautiful.”

The countdown to Kim Kardashian’s wedding date is on: T-minus five days!