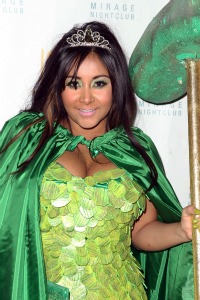 Take it from the shortest and the most powerful woman who has ever graced Seaside Heights, New Jersey! The year 2012 is going to be nothing but trouble, at least according to Nicole “Snooki” Polizzi!

Fresh off of a long relationship with Jionni LaValle and in an interview with The Wall Street Journal, Snooki is doubtful when looking ahead to the year 2012. She was quite thoughtful and serious when discussing what could possibly happen.

Snooki’s ex states, “MTV is making her an alcoholic!”>>

She stated, “I feel like the first thing that’s going to happen is a blackout. And then everyone freaks out and the world goes crazy!”

Snooki then revealed other tidbits that have been bouncing around in her mind about the future, such as the economy.

“The economy is really scary because 2012 is coming. So hopefully, Obama will take care of the economy before 2012.”

Snooki has had other words regarding Obama before. Harsher words. She was clearly angered in 2010 about his proposed tax on tanning salons.

In response to her comment, someone from McCain’s camp responded on Twitter, “@SnOOki, u r right. I would never tax your tanning bed! Pres Obama’s tax/spend policy is quite The Situation, but I do rec wearing sunscreen.”

One thing is for sure, she will enjoy 2012 for one reason primarily, the fifth season of Jersey Shore, which just wrapped up taping in Seaside Heights, New Jersey, this past summer.