Rise of the Planet of the Apes maintained its spot as the number one movie the weekend of August 12-14, 2011, while breaching the $100 million mark. The Help was right on Apes‘ tail, but fell just short. Other new arrivals Final Destination 5, 30 Minutes or Less and Glee The 3D Concert Movie opened with whimpers.

It seems we mere humans are getting a kick out of Andy Serkis’s amazing motion-capture Apes performance. Rise of the Planet of the Apes came in first for the second weekend in a row, banking an additional $27.8 million. That puts the Apes U.S. total at $105.2 million, with $179 million banked worldwide. James Franco and Freida Pinto can likely take some credit for the big win, as well. 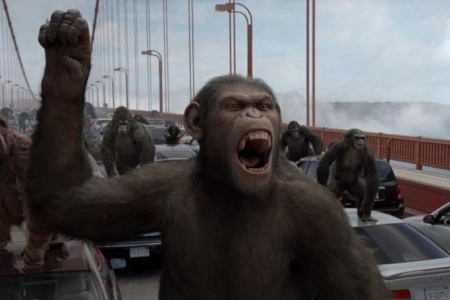 The Help had a strong start, trailing the Ape action by just under $2 million. With an all star cast that included the likes of Emma Stone, Viola Davis, Octavia Spencer, Bryce Dallas Howard, Sissy Spacek and Allison Janney, the female-driven book adaptation kept the other new arrivals at bay.

Of last weekend’s other new releases, Final Destination 5 premiered third and 30 Minutes or Less made the top five, but Glee The 3D Concert Movie? didn’t even place in the top ten. Even with those hefty 3D ticket hikes, the Glee movie came in 11th.

The Smurfs dropped to fourth place, but had a good weekend. The reboot crossed the $100 million mark stateside and continued to take the whole world by storm. The movie raked in $141.1 million overseas bringing the worldwide total to a Smurftastic $242.9 million and counting.

Cowboys & Aliens, Harry Potter and the Deathly Hallows Part II, Captain America: The First Avenger, Crazy, Stupid, Love and The Change-Up closed out the top ten, in that order.

It’s a whole new game next weekend, with three new 3-D movies hitting theaters, including Conan the Barbarian, Fright Night and Spy Kids 4: All the Time in the World. In One Day, Anne Hathaway returns to theaters as a Brit in the romantic drama.