After showcasing her life on Oprah Winfrey’s OWN network and trying desperately to reinvent herself in the public eye as well as in her personal life, Sarah, the Duchess of York, is at it again. It seems that during an Australian television interview, when asked to view the tape of her trying to swindle money from a reporter in exchange for access to Prince Andrew, the Duchess walked out, calling the interview an ambush. 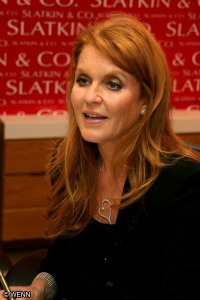 Poor Sarah Ferguson, she just cannot catch a break! The woman who lived the fairytale for so many women, as a commoner who married a real prince, has had one trouble after another both personally and professionally. This time, she was humiliated during an Australian television interview, and it’s one of the hottest videos around!

The interview, which was done during an Australian news show 60 minutes, is being promoted by Australian television as “the weirdest interview you will ever see.”

After agreeing to the sit down and according to the show, knowing full-well the content of the questions beforehand, Ferguson seemed relaxed and at ease during the interview.

But she stormed off the set when she was asked to watch a tape in which she offered up access to her ex-husband, Prince Andrew, for cash.

The scandal of 2010, Ferguson made headlines when she met with a News of the World reporter, offering to sell access to Prince Andrew for about $700,000 U.S. currency. She was secretly filmed accepting a $40,000 cash down payment from the reporter.

The 60 minutes news team stated that the Duchess had previously agreed to speak with them on tape. Revealed a producer from the show, “She agreed to talk about the issue, as she has already extensively done, so it certainly wasn’t entrapment.”

Sarah’s manager John Scott calls the interview an “ambush”. He lashed out at 60 Minutes producer Hamish Thomson. “We had gone through all the questions and subject matter beforehand and filmed all the walking in the park footage before we sat down. She did walk out when she was ambushed, no, it was entrapment, but after cooling down she said, ‘F**k them, let’s do this,’ and she did, but it was a banal interview and her demeanor reflected that.”