Are you ready to cut Footloose? The update of the 80’s classic is due out in October, but SheKnows has a special sneak peek just for you! 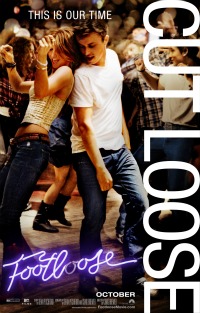 Everybody cut loose! A new trailer and poster for the update of Footloose has been released, and it looks just as fun and dance-eriffic as the original.

“The story is the same, the heart of the story stays true to the original but Craig Brewer (director) sprinkled some contemporary elements on to it.”

Wormald says his costar Julianne Hough is nothing less than an inspiration.

“She’s like the hardest working person I know,” he told Elle. “I was taking a nap one day, and our trailers were combined, and I was sleeping and I woke up because the thing was shaking. I was like what’s going on in Julianne’s trailer because she was working out with her personal trainer- getting fit during lunch while I’m taking a nap.”

Check out the trailer for Footloose:

Read the entire Footloose article in the September issue of Elle, due to hit newsstands August 16.

Footloose is coming to a theater near you October 14.

read on for more footloose

Dance your way to the Footloose premiere!