Kim Kardashian’s wedding is coming! Read on for all the latest details. 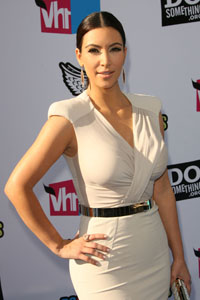 Kim Kardashian’s wedding is only a few days away. We know: it’s hard to believe that all the chatter surrounding her nuptials will culminate in an actual ceremony — we just kinda thought it was some odd E! promotion for Keeping Up With the Kardashians.

Nope, the wedding will actually happen this Saturday. Word has emerged that guests — including Justin Bieber — will be in attendance. However, don’t waste your time looking for ceremony snaps from those inside: we’re told guests will have to go through a metal detector and possibly go through a TSA-style rub down before getting in. Why? Because Kardashian and Humphries have sold the rights to the wedding photos to People for a cool $3 million and it will be televised on an E! special.

Of course, Kim Kardashian’s wedding dress is being designed by Vera Wang — and sister Kourtney Kardashian revealed that the bridesmaid dresses are going to be green.

So, is she freaking out?

“Everyone says that you freak out, but I think all my freak-out moments happened at the beginning when we decided to get married this summer,” Kardashian told E! News. “That’s when you’re like, ‘When and where?!’ So once all those decisions were made…Like this week I’ve been really calm.”

Except for the part where she’s traveling cross-country pretty much every day.

“Last night I took the red-eye at midnight, landed at eight in the morning in New York, ran to Vera Wang for a dress fitting at 10 a.m., then left at noon on another flight out,” she added. “I spent like eleven hours on a plane just to spend three hours in New York.”

Sounds exhausting. What about her hubby-to-be — how is he holding up?

“He’s pretty involved,” she added of Humphries. “I think from the start he made it really clear that he wanted to be involved. I mean, I think a wedding is definitely for a girl. There’s a lot of girly things, but we made sure I incorporated him a lot.”

Can’t get enough? Don’t worry: we’ll have all the latest about Kim Kardashian’s wedding as soon as we get it.

Do you care about Kim Kardashian’s wedding?