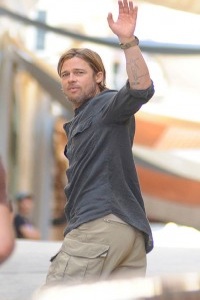 Brad Pitt has been hopping from city to city for his role in World War Z and now he’s going international. The movie is based on the 2006 novel World War Z: An Oral History Of The Zombie War written by Max Brooks. The story takes place in Philadelphia, which is the central location of a zombie apocalypse.

For the film’s shoot, Glasgow, Scotland has been morphed into a carbon copy of the U.S. The city has been given a real makeover with fake cabs, street signs, store fronts, the works. According to The Hollywood Reporter, production begins Aug. 15 and will last through Aug. 31.

Michael Harm, the location manager for World War Z, has been working hard with the people of Glasgow to make sure their visit goes off without a hitch.

“The positive feedback and support we are getting from all corners together with a real buzz of excitement around the city is terrific. We had 7000 people attending the open casting for background artists. We are really looking forward to making this a success for both the city of Glasgow and the film,” Harm said.

To be fair, if Brad Pitt was coming to your town for a few weeks, wouldn’t you be excited too?

World War Z is scheduled to hit theaters on June 21.