Baby Bingham has made his photo debut, snuggled up to mama Kate Hudson. The adorable picture, posted by new dad Matt Bellamy, is meant to do more than just share the family joy. 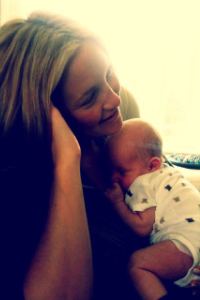 Matthew Bellamy is showing off the first photo of son Bingham and his mother, Kate Hudson. The proud father captioned the photo shared on his official Twitter page, “Family life!”

Hours later it turns out the photo of Kate Hudson and baby Bing is meant to do more than simply show off the loves of Matthew Bellamy’s life. On Monday the rocker wrote, “Wow, these paps are annoying. Thought we’d tweet pic in hope of paps backing off, didn’t work!”

“There should be laws protecting minors,” he continued, “Daily mail – expect to hear from lawyers soon ;)”

One of Matthew Bellamy‘s Twitter followers replied to his message by writing, “I’m afraid thats the price of two celebs getting together…” To which the Muse frontman returned, “no it’s not. Yes for us, but children should be protected.”

Bingham, who gets his unique name from both Kate and Matt’s family trees, is the first child for the couple who are engaged to marry. The actress is also mom to 7-year-old son Ryder from her previous marriage to Chris Robinson.

Do you think children of celebrities should be protected from paparazzi as Matt Bellamy does?