Remember when Austin Powers dominated pop culture? Mike Myers’ iconic James Bond rip-off was everywhere and we couldn’t get enough of him. After nearly a decade away from the screen, Myers, Powers, and his shagmobile are heading back to theaters. “Yeah baby! Yeah!” 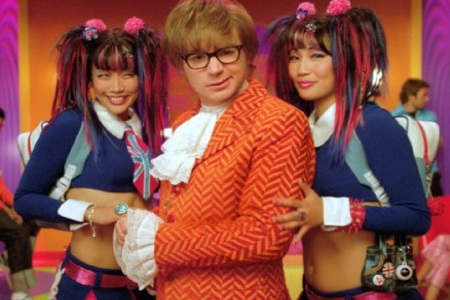 Over the weekend, it was reported by various sources that Mike Myers was looking to star in another sequel in his Austin Powers franchise. The last film in the series was released in 2002 and featured Beyonce as Myers’ leading lady. After 10 years away, are you ready for more sexy time with Powers?

It’s been a while since Myers has dominated the box office (aside from Shrek) so he’s returning to his biggest cashcow. The Hollywood Reporter claims that the actor is set to write, produce and star in what they’re calling Austin Powers 4. The film proposal has been hanging around New Line Cinema for a while and Myers is closer than ever to signing on the dotted line.

The possibility of another Powers sequel almost seems too good to be true. Therefore, we’re not surprised that sources close to the deal say we should remain cautious. The original Austin Powers trilogy was directed by Jay Roach but there’s no word on who will take on the new film.

Nothing’s been finalized so keep your fingers crossed!