The news has finally come — Breaking Bad has been renewed for a final season. Read on for all the details.

To fans’ delight, Breaking Bad is getting picked back up — only problem is that it’s for a final season. That’s not so good. 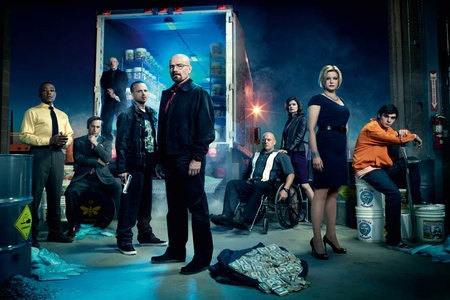 AMC has decided to renew Breaking Bad for a16-episode final season to wrap up the critically acclaimed show.

Our estimates tell us that will put the show ending somewhere around next year — possibly 2013 — depending on the airing schedule.

“It’s a funny irony — I’d hate to know the date of my own last day on earth, but I’m delighted to know what Walter White’s will be,” creator Vince Gilligan said of the last episodes. Before you go thinking he’s alluding to the death of Walter (Bryan Cranston), relax, he’s metaphorically speaking.

He added, “This is a great gift to me and to my wonderful writers. It’s knowledge which will allow us to properly build our story to a satisfying conclusion. Now, if we don’t manage to pull that off, we’ve got no one to blame but ourselves.”

The renewal news comes on the heels of Sony trying to shop the show to other networks at a time that was tough and Gilligan knows the part Breaking Bad will play when he moves on. “Breaking Bad has been a dream job these past four years. Working with the best cast and crew in television has no doubt spoiled me for future projects,” he said.

Gilligan concluded, “I’m lucky to get to work with them on sixteen more episodes, and I will always be grateful to both AMC and Sony Television, who from the beginning, believed in our show and supported me creatively and professionally. We have been able to take risks with Breaking Bad which would not have been possible on other networks.”

For fans, the fact that Vince Gilligan knows his end date should be a comfort. It means he can properly take the time to send Breaking Bad out with a bang.

What do think of Breaking Bad’s final season announcement?