Hilary Duff and Mike Comrie are going to be parents, the actress confirmed on her official blog.

Hilary Duff revealed a bit of big news on her blog Sunday: she’s going to be a mom! The actress, 23, and her husband, hockey player Mike Comrie, announced the addition to their family just in time for their first wedding anniversary. 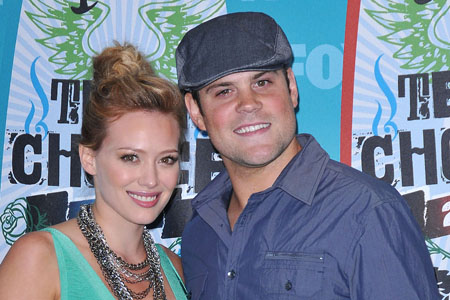 “We also want to share the exciting news that… BABY MAKES THREE,” she wrote. “We are extremely happy and ready to start this new chapter of our lives.”

What a great anniversary present, eh?

Duff and Comrie dated for a couple of years before getting married on Aug. 14, 2010. Naturally, the pregnancy rumors started soon after.

“We’re excited to have kids,” Duff said after her wedding. “But we don’t want to do it now. We’ve been married for six weeks.”

It didn’t stop the rumor mongers, though.

“They weren’t actively trying to conceive but agreed that if it happened, it happened,” a close friend told Star in January. She later dispelled the rumors on Twitter.

“Wow what a way to wake up and find out your pregs!” Duff wrote. “It’s just a rumor guys! Not true. But thanks for all the good wishes! Lol”

Now it’s for real! No word on when she’s due or the gender of their upcoming bundle of joy, but we suspect we’ll hear much more about it in the coming months.

Do you think Hilary Duff will be a good mom?