Brooke Hogan is tired of people mocking her relationship with her father — especially after he was seen at the release of her nude PETA pics. 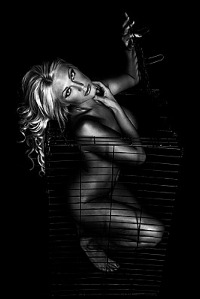 The recent Brooke Hogan nude photos taken for PETA raised some eyebrows, but not because of the subject matter. What shocked the public more than her uncovered curves was that her own father gleefully attended the unveiling.

While the image is definitely more artistic than scintillating, the fact that Hulk Hogan was there to see it was just fuel for the fire that there’s something weird about their relationship — a rumor that started when the wrestling legend was photographed rubbing sunscreen all over his adult daughter’s body several years ago.

Not helping matters is the fact that Hulk’s new wife is a dead ringer for his daughter — in fact, the girls were actually classmates!

Brooke Hogan has had enough of the icky whispers — and she sounds pretty ticked.

“Im SO sick of people saying me and my dad are in some perverted relationship,” she wrote on Twitter.

“Go home and do your own thing! Stop picking on me!” Brooke tweeted.

Hulk was spotted at the unveiling of the striking photo, reportedly covering up some of the more revealing spots with his hands.