Brooke Burke and David Charvet have tied the knot in an intimate island ceremony. A rep confirmed the couple is married! 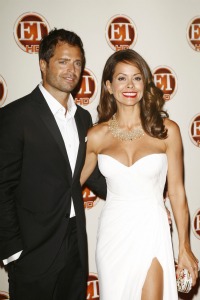 Brooke Burke is a new bride today! The Dancing with the Stars host married former Baywatch actor David Charvet on the beautiful island of St. Barts on Friday.

Burke announced the news via Twitter Sunday morning, writing “sending my 1st good morning tweet as Mrs. Charvet…Its true, we finally did it with love and certainty. OMG, I am a married woman!!!”

“sorry to be so secretive, but we REALLY needed a private moment just for us for all the right reasons. Love you guys xoxo”

A rep for Brooke Burke later confirmed the news.

The couple reportedly tied the knot on a private yacht under the stars near the island of St. Barts.

The Dancing host addressed the issue of marriage last year on her blog, saying that although the couple had been engaged since 2006 the real marriage talk was finally starting to heat up.

“David and I have been talking marriage lately,” she wrote. “We are just at that place, where love is deep and meaningful, and we are feeling very settled.”

“When the subject of marriage came up the other day, we started talking about why to do it at this point in our relationship. We have a home together, 2 kids together, my other 2 that David is helping raise, and we are totally married in our hearts. ‘Do you want forever?’ David asked. ‘Yes, I need forever’ I said. It was just that simple. I would like to have a ‘Husband’. David has been calling me his WIFE for years, but I have always joked about being only his wanabee wife. I have never said Husband when referring to him and I rarely correct anyone when they give him that title.”

Burke and Charvet have been together for years and have two children together, four-year-old Rain and three-year-old Shaya. Burke has two other daughters from her marriage to Extreme Makeover plastic surgeon Garth Fisher, 11-year-old Neriah and nine-year-old Sierra Sky.