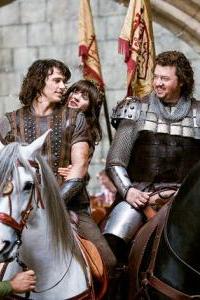 Your Highness
Your Highness is a pot comedy, sure, but that’s barely the surface of the comic juice in the film starring Danny McBride, James Franco, Zooey Deschanel, Natalie Portman and Justin Theroux. McBride is Prince Thadeous, insecure brother to dashing war hero Fabious (Franco). After wedding mania hits the castle, the princess is kidnapped and the brothers go on a classic quest. That’s where butt-kicking Portman catches Thadeous’ eye and the hilarity ensues.

Mars Needs Moms!
Milo (Seth Green) must find his mother (Joan Cusack) and rescue her, but first he must get to Mars and find out why Mars Needs Moms. The most charming aspect of the animated tale is the subtle yet concrete message about parents and their role in raising children. The splendor on screen entertains the young and when the credits roll, the hugs commence. Maybe that’s why I wanted to hug my mom when I left the theater. Dan Fogler and Elisabeth Harnois also star.

Paul
British nerds (and I say that with love) Graeme (Simon Pegg) and Clive (Nick Frost) come to the US to hit Comic-Con and take a road trip across country. After checking out Area 51, they witness a crash and meet Paul (voice of Seth Rogan), a little green guy who landed decades ago. The pop-culture aficionado is the cutest alien since E.T. and he eats live birds, and needless to say, his very existence throws ultra-religious Ruth (Kristin Wiig) for a loop. If you’re easily offended, you may want to skip this one. If you’re not, you’re going to have a blast.

Jumping the Broom
Angela Bassett and Loretta Devine played best gal pals in the excellent film Waiting to Exhale and they are together again… as rival mother-in-laws-to-be. Paula Patton and Laz Alonso team up as the feisty bride and groom from different sides of the tracks in this relatable wedding dramedy that asks: What happens when a tradition-honoring, middle class mom (Devine) clashes with a modern, upper crust matriarch (Bassett)? 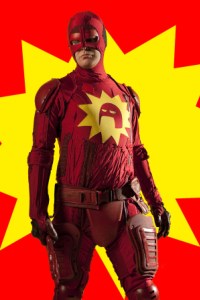 Here are some other new releases in the DVD/Blu-ray market this weekend.

Super: Rainn Wilson, Ellen Page and Liv Tyler take on the super hero genre and with this crew in the mix, you can expect laughs. After his wife leaves him for a drug-dealing scumbag, Frank D’Arbo decides to give his miserable life meaning and transforms into the Crimson Bolt, a superhero with all the best intentions but none of the requisite skills.

Camp Hope (Camp Hell): Jesse Eisenberg, Andrew McCarthy and Dana Delany go for shock and aw in this horror thriller about a summer camp for Christian children of a New Jersey suburb that goes to hell when a charismatic priest brings in something evil with him.

The Fox and the Hound: The 1981 classic animated film follows the unlikely friendship between a hound dog pup, Copper, and a baby fox, Tod. The pals grow up and their friendship is tested, as Copper is expected to hunt Todd. Mickey Rooney, Kurt Russell and Pearl Bailey give voice to the characters.

Cameraman: The Life and Work of Jack Cardiff: This documentary traces the career of Jack Cardiff (1914-2009), the first director of photography in the history of the Academy Awards to win an Honorary Oscar. This look back at movie making includes footage of Martin Scorsese, Kirk Douglas and more.

TV Fun: Daytime fans may want to check out Oprah Winfrey: The Past, The Present and Future. Other new releases include Saving Grace, Secret Diary of a Call Girl: The Final Season, M.A.S.K.: The Complete Series, Dr. Who: The Sun Maker, Cheyenne: The Complete Second Season, TV Cops & Private Eyes, Webster: Season 3 and Top Gear: The Complete Season 16.