While moviegoers are enjoying the master storytelling that is The Help, a group of women released a statement today that the tale of African American maids in the 1960s is not accurate. Stars of the movie were reportedly prepared for this backlash as it brings back to the front burner the racially charged decade.

The Association of Black Women Historians urges fans of both the best-selling novel and movie The Help to look beyond what was the opinion of one writer, and really consider the women the novel is centered upon. The statement issued read, “Despite efforts to market the book and the film as a progressive story of triumph over racial injuustice, The Help distorts, ignores and trivializes the experiences of black domestic workers.” 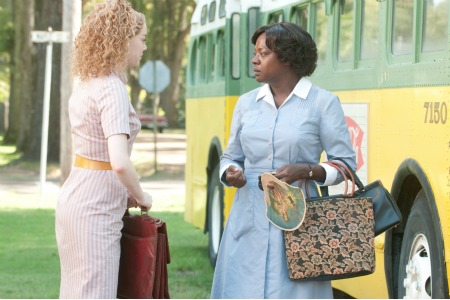 While the group admires and respects the performances of the movie’s black actresses, they felt that the scene where the black community did nothing but become afraid after civil rights pioneer Medgar Evers was assassinated was inaccurate. It is noted that during a screening hosted by the NAACP, his widow Myrlie Evers-Williams loved the film.

They took a stand against the dialect used in the book by author Kathryn Stockett, the fact that she portrayed black men as absent and her version of the harrassment black domestic workers endured for years at the hands of their rich employers.

The real story behind The Help>>

The group also states, “The Association of Black Women Historians finds it unacceptable for either this book or this film to strip black women’s lives of historial accuracy for the sake of entertainment.”

Castmate Viola Davis has won rave reviews for her performance of Aibileen Clark, the character who agreed to speak out on the mistreatment of black women who served as domestic help for racist white women in the story. Said Davis, “I feel like I’ve brought my mom to life; I’ve channeled her spirit,” she told The Hollywood Reporter.

“I channeled the spirit of my grandmother and I’ve kind of paid homage to how they’ve contributed to my life and the lives of so many people. She also revealed that her mother was herself a housemaid in Rhode Island during the same era where the film takes place.

Said Viola, “My mom was very young when she had me and worked as a domestic and in factories. It was just terrible because she had gifts, she was capable. But there were no choices for her except basic survival.”