Miranda Cosgrove is lucky to be alive following a tour bus accident as the star was en-route to the latest stop on her Dancing Crazy tour. Early Thursday morning, outside of Vandalia, IL, Cosgrove’s bus collided with a tractor-trailer. The young star of the hit Nickeldeon show iCarly broke her ankle, but luckily, sustained no other injuries.

Related story Is Miranda Cosgrove faking her injuries to get more money in a lawsuit? 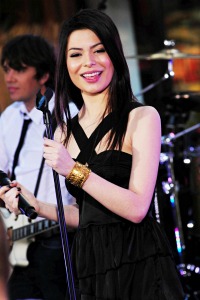 Miranda Cosgrove has been on a personal high for the past several years, ever since the success of her Nickelodeon show, iCarly, catapulted her into the teen stratosphere. She has enjoyed a life that many would say is full of luck, but if you asked Cosgrove, she would likely say she is more lucky now than ever.

The circumstances of the events of the morning of August 11th are still coming out, but People.com released information stating that the accident was “life threatening”.

See more about the crash here>>

Although Cosgrove, according to a source, was “badly shaken” by the event, luckily she only sustained a broken ankle. People revealed a source that stated, “Miranda’s mom was on the bus with her and got really beaten up by the crash. She’s expected to fully recover, but its scary because the driver was hurt too and he’s in really bad shape.”

“This was a life-threatening crash. A piece from the tractor-trailer went straight through the windsheild and the driver’s arm was sliced all the way through,” People reported.

Thankfully, the other people on the bus were not injured, and it is likely because they were asleep in the back of the bus when the accident occurred. Cosgrove was reportedly asleep on a couch towards the front, so she felt the impact of the accident.

Fans have been sending well-wishes to Cosgrove by the thousands. She is currently the top star of the Nickelodeon network and a role model for young girls everywhere, reportedly earning over a million dollars for the next 26 episodes of the show. Her face guarantees merchandising success as fans want to look like, dress like and interact with Miranda and the cast of iCarly as much as they can.

Cosgrove is expected to return to her home in California to recover. Her tour will tentatively pick up in the fall, depending on her filming schedule.