Brooke Hogan got naked and climbed into a cage for a photo shoot. And she did it all for the animals. 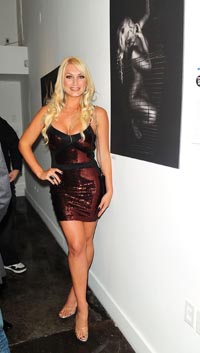 Brooke Hogan had her dad Hulk Hogan blushing at the Women in Cages exhibit last night. The 23-year-old reality TV star posed nude for a PETA photo campaign designed to bring awareness to cruelty to animals.

In the black and white photos, Brooke Hogan is naked in a cage, making an effort to claw her way out. The sexy shots prompted dad Hulk Hogan to cover his daughter’s girly parts with his hands — on the photo, of course — at the event, held at the Cafeina Lounge in Miami, Florida.

Hulk Hogan’s wife Jennifer McDaniel also attended the event, although she left the covering up to the Hulk. Also present at the exhibition, according to Daily Mail, were Katrina Campins, who won the first season of The Apprentice, and Ines Rivero, a model from Argentina.

Brooke and McDaniel also celebrated Hulk’s 58th birthday with him. He was presented with a cake with the word Hulk in silver letters on top.

It’s good to see the Hogans in the news for something other than family drama. The divorce between Hulk Hogan and Brooke’s mom, Linda Hogan, got ugly.

We think Brooke Hogan looks great in the sexy photos and as the Daily Mail pointed out, it’s nice to see a woman with curves baring it all.