The Zac Brown Brand hits New York as they play some of their favorite songs on the Today show stage – and received a plaque because their album, You Get What You Give, went platinum.

The Zac Brown Band got quite the reception on the Today show, with fans lining the streets and surrounding the stage to hear them play their hit songs, including Chicken Fried, Keep Me in Mind, Free and the song Knee Deep, their new single with Jimmy Buffett. 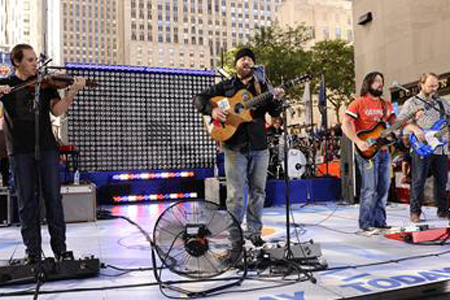 Even though Buffett didn’t make the Today show appearance, Brown told the crowd he was his hero.

“I think he’s one of the best American songwriters who ever lived,” he said. “I’ve been covering his songs forever, and to actually get to collaborate with some of my heroes has been some of the big milestones in my career.”

In a short amount of time, Zac Brown Band has an impressive resume, including eight number one hits and their 2010 album, You Get What You Give, has just gone platinum.

So, has all the success gone to Brown’s beanie-topped head?

“Every day I pinch myself,” he tells Al Roker and Natalie Morales. “We travel a lot more comfortably now. There’s a lot of things that have changed, but the core — we love what we do, we love our craft, we love the fans, we love to be doing what we love to do. We count our blessings every day, we get to be here and be able to do it. This is a great thing.”