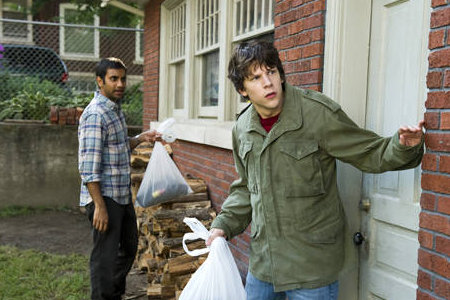 Jesse Eisenberg has gotten himself into a situation.

And we’re not talking about his encounter with the Situation, which we’ll also discuss in a bit. Rather, it’s the prospect of him robbing a bank with a bomb strapped to him in the new action comedy 30 Minutes or Less. In it, Eisenberg stars as Nick, a down-on-his-luck pizza delivery man duped into robbing a bank by baddies who strap an explosive vest on him.

“Part of the fun is how these two regular guys (Nick and Chet) got into a Steve McQueen (style) action movie,” Eisenberg said. “I’m a pizza delivery guy and he’s an elementary school teacher and we are thrust into this (situation) where we’re forced to rob a bank.”

It’s a fast-paced black comedy of errors with lots of thrills.

“The bad guys in movie are pretty evil,” Eisenberg said. “Luckily, they’re played by these funny and sweet guys, Danny McBride (from HBO’s Eastbound and Down), Nick Swardson and Michael Pena, so the darkness of the movie is offset by the silliness these guys bring to their roles.”

As unlikely as the pizza man in the bomb vest scenario is, it does parallel the case of Brian Wells of Erie, Pa., who died after robbing a bank with a bomb strapped to him in 2003. Wells’ family told the Associated Press that they are upset with filmmakers.

A spokesman for Sony’s Columbia TriStar Motion Pictures has said actors and filmmakers were unaware of the 2003 Wells case, although the screenwriters were vaguely aware if of.

“I know of the story now and my heart goes out to that family for the terrible tragedy they suffered,” Eisenberg said. “The movie is very dissimilar and when they see it they’ll realize that right away. This was sent to me as story of fictional characters put into this crazy situation that I thought would lend itself to a really good movie.”

Eisenberg knows about those. Last year’s The Social Network put Eisenberg’s career into another orbit thanks to his steely portrayal of Facebook founder Mark Zuckerberg. The role made him an A-lister and brought him an Academy Award nomination for best actor.

There’s no resting on his laurels. Upcoming for the 27-year old is the Woody Allen film The Bop Decameron and more immediately he’s headed to off-Broadway, where he’ll star in Asuncion in October at the Cherry Lane Theatre.

It’s a play he wrote.

“When you’re an actor, you do a movie and it’s all over the world and your face gets plastered everywhere,” Eisenberg said. “But the reality is there are long periods of downtime, so it’s important to have some other interests.”

But when a movie is released, an actor can find himself among interesting company. Take Eisenberg’s appearance on The Tonight Show with Jay Leno this week, where he was paired with Mike “The Situation” Sorrentino of Jersey Shore fame.

The two grew up only about 30 miles fromm each in central New Jersey, but had never met before.

“He seemed very nice,” Eisenberg said. “I’m not familiar with the show — I mean I know the name of the show but I don’t know the show well enough for me to pepper him with any type of questions. He knew people from East Brunswick (Eisenberg’s hometown) who I didn’t know, which made sense. I hear that he comes across cocky on the show but he seemed like a sweet guy.”

Maybe he was on his best behavior because he heard about heard about Eisenberg’s bomb vest?