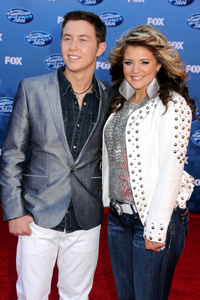 Even though they are friends off-stage, Scotty McCreery and Lauren Alaina are good-natured rivals on stage! The American Idol alums will be releasing their debut albums this fall – and this time fans can vote for their favorite by albums purchased and iTunes downloads.

American Idol champ Scotty McCreery, 17, will release his debut album, Clear As Day, first on October 4th. His debut single will be I Love You This Big, which is already a Top 20 hit for the country crooner.

What can we expect with his new album? “It has some old country influences and elements, but it also has a contemporary feel with fun up-tempo songs,” Scotty says. “It’s a good mixture. You can hear some of the influences that I grew up with, like Hank Williams, Conway Twitty and Merle Haggard, but it still has a contemporary twist and feel that keeps it up to date.”

American Idol runner-up Lauren Alaina will release her debut album, Wildflower, on October 11th. Her debut single will be, Like My Mother Does, the song she first performed on American Idol.

“I feel like it has a flavor for everybody. It’s a mixture of all different songs, so I hope it will appeal to all different kinds of people,” Alaina, 16, says of her debut album. “There are fast songs for people who like up-tempos that you can dance to, and there are also tearjerkers for people who like slower ballads. I tried to get songs that are all a little different so that we could bring a fresh feel to each and every song.”

Tell us:  Are you more excited for Scotty McCreery or Lauren Alaina’s debut album?