Rose McGowan isn’t holding anything back! The Charmed star talks about being raised by drag queens and how she would be stoked to film a lesbian love scene. 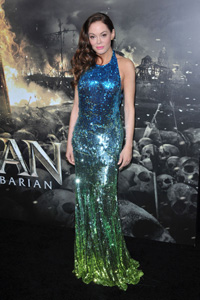 From kissing Marilyn Manson to kissing girls? Charmed actress Rose McGowan, who will be appearing in the upcoming movie Conan the Barbarian, opened up to The Advocate about her unusual childhood and lesbian love scenes.

Born into the Children of God cult, McGowan reveals that she ran away from home and was raised by drag queens. Say what?

“At 13, when I was a runaway, I was taken in by the most amazing drag queens in Portland, Ore. We didn’t always know where our next meal was coming from, but there was so much camaraderie and love,” McGowan says. “Not to mention, those girls could paint a face, and I learned how because of them.”

She says she remembers sneaking into clubs when she was underage. “Whether it was how I danced or the way I looked, I was always quite celebrated in the gay clubs. To this day, I only go to gay clubs. I’m perfectly at home there. I also like watching hot boys and hot girls who can dance.”

She admits she is attracted to girls – but only the ones that look like guys. In fact, her ideal woman would be a girl version of Rachel Zoe’s former assistant, Brad Goreski. “I disappoint myself. I’ve never even kissed a girl. Isn’t that funny? The girls I think are cute look like guys, but then I think, But if they open their shirt, they’ll have breasts,” she says.

McGowan, who has appeared in movies such as Scream, Grindhouse and Jawbreaker,  says she would like to kiss a girl. “I’d be stoked to do a lesbian love scene. When asked if I’ve kissed a girl, I could finally say, ‘Why, yes, I have. And I got paid.'”

And as for her lesbian love interest? “…Someone like Ava Gardner. I will not be a cliché and say Angelina Jolie.“