Celebrities, including Slash, Bret Michaels and Nikki Sixx, are reacting to the death of Warrant frontman Jani Lane.

Cherry Pie singer Janie Lane, who was frontman of the ’80s hair band Warrant,  was found dead at a Comfort Inn in Woodland Hills, CA. He leaves behind his wife, Kimberly, and four children.The cause of death has yet to be determined, however the 47-year-old singer has struggled with alcohol addiction in the past. 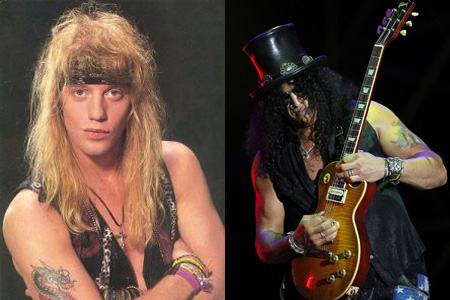 “Jani will be missed by all,” a statement says on his website. “Very unexpected and tragic news of his untimely death. Jani just wrote the updated bio (himself) and had been recording lots of new music. God bless him.”

Guns N’ Roses guitarist Slash tweeted his sadness over the death of his friend. “Just heard about Jani Lane. What a shame. RIP man,” he tweeted.

Poison frontman Bret Michaels, who had toured with Warrant in the ’80s, tweeted his condolences: “We’d like to offer our deepest condolences to the family of Jani Lane regarding their loss. Respectfully, Bret and all at MEGI.”

Here are more reactions from celebrities tweeting their condolences:

Motley Crue bassist Nikki Sixx:  “I just heard the sad news about Janie Lane. So hard to swallow when people have kids. RIP.”

Former MTV VJ Martha Quinn: “Super sad news. Jani Lane, dead at 47. His body found in a So Cal hotel. No cause yet. #RIP Jani Lane.”

Jennifer Gimenez of VH1’s Sober House: “It is very sad and my heart is saddened to hear the news that I lost my lovable friend Jani Lane.”

Pro wrestler Chris Jericho: “Sad to hear about the passing of Jani Lane … Jani was a good guy and one of the best songwriters in the late 80s … Dog Eat Dog-very underrated.”

Comic Jim Florentine: “So sad to hear about the passing of Jani Lane. He just taped an episode of That Metal Show 3 weeks ago and was in great spirits. RIP Buddy.”

Josie Steven’s of E!’s Married to Rock: “Very sad to hear that Jani Lane passed away, my thoughts and heart go out to his friends, family and fans…”