It was a night of close calls for the Jersey Shore cast, as they hit Florence full force on episode two of season 4. It was a full episode of GTL, hook ups, revelations and mishaps, as Snooki, Mike, Pauly, Vinny, Jenni, Ronnie, Deena and Sammi adjusted to life in Italy.

It may only be the second episode of the Jersey Shore‘s cast trip to Florence, but there’s some serious relationship issues going on and the hookups are not what you’ll expect. Think Pauly and Deena, Snooki and Mike and (yikes!) Sammi and Ronnie! 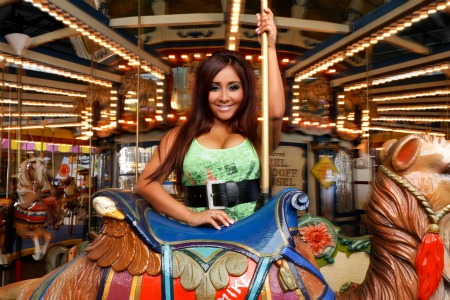 When episode one ended, we saw a serious tongue-lashing going on between Pauly and Deena. No, they weren’t arguing. It was more like two animals in heat trying to grab each other’s tonsils out through their mouths. Ewww! Then to hear Pauly say in a sound bite, “Deena’s a good kisser, I’m a good kisser.” Kind of makes you wonder what really goes on when they pull the sheets over their heads during hookups.

Deena wants to snuggle with Pauly and he’s okay with it. Yet he worries their friendship will be put to the test because, he reveals, he hasn’t met one girl that he’s hooked up with, that’s a friend who doesn’t have feelings for him afterwards. Deena said she doesn’t, but in one scene, you see the jealousy that rages in her eyes when Pauly is dancing with another girl.

Mike, on the other hand, is still smitten with Snooki, although she is in a committed relationship with Jhonni. He tells her that he will always be there for her and that he loves her, but more than a friend. He said to her, “There’s something between me and you.” Snooki replied, “You know we’re good friends and that’s it.” But you can see cracks in her relationship with Jhonni as he screams at her over the phone for not calling him once a day and Mike hovering nearby to pick up the pieces of her broken heart.

Sammi is trying to keep her distance from Ronnie, but every little thing he does still annoys her. Although she said in the first episode, “No more tears for Sammi sweetheart”, there she was, outside the club, crying to Snooki. At the end of the episode she said to the camera, “I have feelings for Ron, why not act on them?” This, despite the fact that Ron has a girl coming to visit him in Italy in a couple of weeks.

Other mishaps include the girls starting Sunday dinner and then leaving it half done to go out to shop and eat lunch. You’ll also see the gang heading to the grocery store, but not being able to read the names of any of the items on the shelves, Jenni being frustrated while trying to make coffee in an espresso maker and everyone getting a first hand look at how to create a pizza. This season, they will be working at Pizzeria O Vesuvio under Marco, who doesn’t speak English and has a hard time communicating with the cast.

Guess Snooki summed it up in one sentence last night, “I love Rome, I mean Italy!”