Once upon a time Jeff Bridges feared you’d always think of him as The Dude from The Big Lebowski. Now he’s 61. Things have changed. 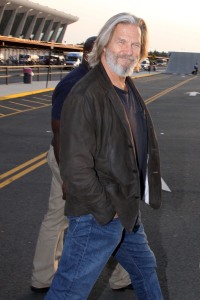 Jeff Bridges is over worrying about being typecast in the public’s mind as The Dude. Though the actor and musician used to worry he’d never outgrow his beloved character in The Big Lebowski, age has assured him it’s not worth worrying over.

The release of The Big Lebowski on Blu-ray coincides with the latest musical work of Jeff Bridges, a self-titled album.

“I love that movie, I loved making it, I love the Coen brothers,” Jeff Bridges tells USA Today. “It was a real high point for me. It was not a hit, so it’s fascinating that there are now Lebowski festivals. I had my Beatles moment when I played a Lebowski fest in front of a sea of Dudes.”

While a love of The Dude is to be embraced as far as we’re concerned, Jeff Bridges hasn’t always loved being strongly linked with the profanity-prone character.

“Early in my career, I was concerned about not developing a strong persona,” the True Grit actor says. “Because my father (Lloyd Bridges) was so good in Sea Hunt, people thought he was Mike Nelson. I saw how frustrating it was for him. He was a singer, a Shakespearean actor, a comedian, but he got stuck in a small niche.”

Thus Jeff Bridges sought to mess with our minds. The actor sought out a variety of characters “to pleasantly confuse the audience and make it easier for them to accept me in different roles.”

At present time the worry over The Dude take-over is a thing of the past. Jeff Bridges declares, “Now I’m 61 and I don’t give a [expletive]. I’m going to do what I’m going to do. I don’t have anything to prove.”

Jeff Bridges, we think The Dude would highly approve.