Camille Grammer has fanned the flames of animosity with her ex Kelsey Grammer by insinuating a certain part of his anatomy is not up to par — and his new wife is coming to his defense. 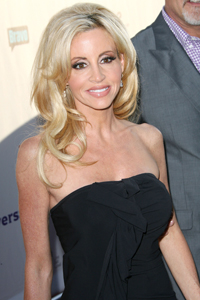 All is fair in love and war — even the worst insult you can give a man. Camille Grammer has obviously not gotten over the animosity between her and ex-husband Kelsey Grammer, and is talking about the size of his penis — or lack thereof.

First Camille discussed the small subject in a promo for The Real Housewives of Beverly Hills, in which she’s heard describing Kelsey as, “Big hands, big feet, big disappointment.”

When asked by street photographers in New York if she meant what she said, Camille responded, “It was a lot like that. I had that for 13 years, unfortunately.”

Kelsey’s new wife Kayte Walsh has stepped up to defend her man’s member. In a statement that sounds like it could have come straight out of the mouth of Kelsey’s beloved character Frasier, Kayte pointed out, “Perhaps the fault lies not so much with the member in question but rather with the inspiration at hand.”

Frankly, since Kelsey said Camille smells like beef jerky he kinda deserves this.