Good news True Blood fans — the show has been picked up for a fifth season. 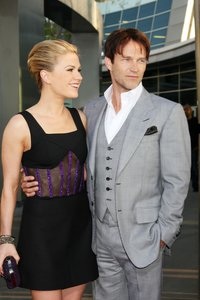 As if there weren’t enough blood sucking going on in the world, HBO has decided to renew True Blood for a fifth season.

Oh, come on, you’re not really shocked are you? The show has a huge following.

The official announcement read, “HBO has renewed the hit show TRUE BLOOD for a 12-episode fifth season, it was announced today by Michael Lombardo, president, HBO Programming. Created by Alan Ball, the series will begin production of new episodes later this year in Los Angeles, with debut set for summer 2012.”

Are all you Sookie (Anna Paquin) fans getting ready? We can almost see the fangs being sharpened as we type this!

“I am thrilled that TRUE BLOOD continues to enjoy a phenomenal reception from both subscribers and critics,” Michael Lombardo said.

He added, “Alan Ball and his gifted team have devised the greatest thrill ride on TV.”

Alan Ball made his own statement, saying, “I remain amazed and delighted by the enthusiasm of our viewers. I can’t imagine having more fun than this.”

True Blood recently received four Emmy nominations so this news is really not news, it’s more of a confirmation of what we already knew.

Are you ready True Blood fans? Is it too hard to think of a season five with season four underway?